We do this dance each year and not often enough: a trio of gaited fast-moving horses, a brace of gun dogs, a sprawl of wide country. Shotguns in scabbards, bird dogs out in it, horses mounted. We ride. 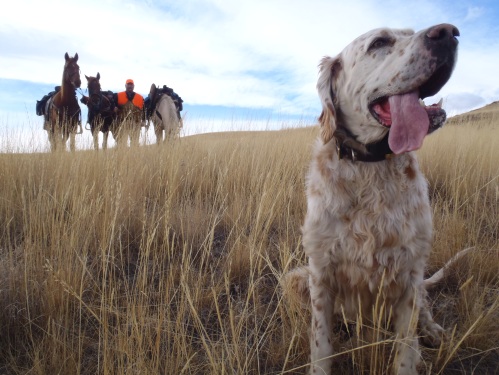 The first point is right near the truck and trailer and she is on them, with her male partner backing. She is always on them first, it seems. Ninety-five percent of the time, it is the female, that rare talent. And when she doesn’t find them first, she always honors, always. But to the first covey, a burst of Huns and a bark of shotgun. Over the next hill they flew and after the shots, we mount again and ride over that hill, searching blind.

Where did they go? They were cupping their wings like teal stooping to decoy when last we saw them, but where they went, we do not know.

We grid the grass, sweeping one way, then another, for horseback your energy does not get exhausted by the endless plod of boot. Instead, you can cover the country, turn back, and cover it all again. And there they are: the covey and this time it is your turn to watch and hold the horses and the shotgun barks again.
You decide to find another covey, giving this one a break, for you have taken enough and one must always leave some “for seed.”
So you ride. In your saddlebags you carry old orange juice jugs filled with water and you stop occasionally and water hard-panting canines and then you ride on. The dogs vacuum up the country, running big, running hard and you cover it all and then there’s another point, and it’s your turn to shoot.
“Here give me the reins.”
And you walk in, loading the gun and moving to the point and the birds get up and you single one out and pull the trigger, then move to another as that one falls and then it’s “Dead bird. Dead bird.”
The dogs find the birds and bring them in and you mount again and find a new covey.

As the day draws down and the dogs with it, you have found four big coveys over a reach of wide ground that it would take you two days to hike across. Afoot, you would maybe run 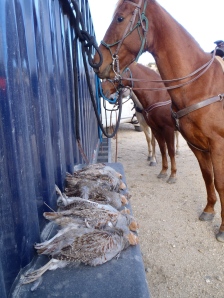 one covey down and then be done, spent. Ahorseback, and you are fresh.

You are out of dog though, for their lope has slowed to trot and their range has gone from the horizon to just a few hundred yards. Except for her. She keeps going. Somehow. How?

Drive. A lust for the wide open. A beckoning to know what is over the next hill. A whispered promise of game before bird dog and joie de vivre. That is how.