In the Hall of the Chukar King

Out of breath, I stop to leave a little water in this otherwise dessicated landscape. Looking down, I note that my boys are as red as chukar legs in that detached, objective way not uncommon to moments of pain and survival. This trip is beginning to take a toll on me. Looking up, I survey a thousand feet of loose scree and caprock and cheatgrass above, and hear them laughing from on high. I try not to take it personally, though it is most definitely personal, and I continue scrambling to reach their steep patch of hell, simmering with murderous intent.

I know they are close – the dog starts getting birdy and then locks, just as half the covey pulls a flanking maneuver, 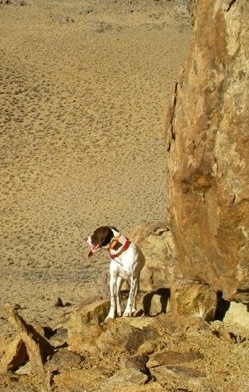 running around behind him and then they all get up simultaneously – a dozen chukar exploding and tormenting him from all sides. He predictably loses his shit, jumping in the air and spinning and barking. Poor little bastard. No good dog deserves this. Instead, some of them, like some of us, simply become addicted in spite of better judgment; gluttons for punishment.

As the chaos subsides and I tell Hank it wasn’t his fault, I hear the lone holdover bird flush behind me. Wheel and fire and the bird drops decisively. Mistakes are unforgiving here; a maxim that applies to us as much to us as it does to them.

It wasn’t a classic take over a point, but you don’t always wait for that in this country, on this quarry. No, this is guerrilla warfare, and I don’t mean that lightly. Refined gentlemen and their traditions and their rules remain far below, looking up at places like this through binoculars.

From above the saddle I watch the covey flush wild and take cover in a jagged outcropping, disappearing into the crevices. We learn from their flanking tactics and return in kind. It’s so damn steep I practically have one knee braced into the hillside when I see the GSP locked up hard, balanced on a boulder. I catch my breath, taking a second to admire the work of this first-season pup, and release him with an “ok.” He rockets in and the little devils get up and I promptly send two of them to meet their infernal maker. I watch the birds drop 75 yards below me on a 50 degree slope of nasty, loose, volcanic talus. Even in death these fiends make you pay.

Lest the wrong impression is given, I spend the next day going through an entire box of shells with only two hitting their mark. Fast passing shots on birds dropping from above at mach speed, whiffed. Shots taken at birds that I knew damn well were out of range, solely out of frustration, hoping to bend physics to my will. It didn’t work. 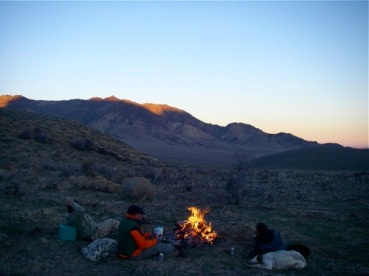 Evening is not exactly  the affable return to the sprawling lodge after a jaunty day afield one imagines in the sportsman tomes of yore. It is instead a deliberate refueling with piles of greasy sustenance; a licking of wounds with corn liquor salve and barley-based anti-inflammatories. Plotting, debriefing, refiguring tactics – a team effort to recharge before tomorrow’s redeployment. The banter is generally about as offensive as you can imagine. The easily affronted might want to camp somewhere else. Far away.

Dawn reaches our cold little camp in the arroyo and high-octane joe eradicates the last vestiges of rust from sore muscles and we’re off. We ascend to the Hall of the Chukar King yet again – knowing they await far above, assuming they’ll be no easier than they were yesterday, working like you would for no other upland species, to return spent, with maybe a few birds in the bag and the weary contentment that only comes from having your ass handed to you by a small, crafty partridge in a vast, alien land.

6 responses to “In the Hall of the Chukar King”