In camp and around the house, he is a big loveable goofy bastard.

Right now, though, he’s on point and it is as classic a point as a setter man in a life of setters is likely to see. He is white and handsome and up against the skyline behind a juniper and frozen. Solid. A salt pillar.

One covey back, he had pointed and then broke with the shit-hell expression of a pup on his mug, flushing birds like playing cards shot into a stiff wind. Rotten sonofabitch, with a smile. 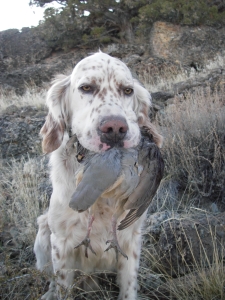 This time, I tell him “hold, buddy” (one does not command this dog, one converses with) and stumble-skip across mean footing and see the covey.
They go up in a flurry of gray wing and clown’s mask and I swing carefully and pull the trigger and one goes down. I do not think about a triple or even a double. One is enough, one good chukar after one good point.
His name is Echo and he’s here on the mountain with me as a partner, not as a dog doing the work for a walking man. For the most part I am not in that run-and-blast, stagger-and-fall, curse-and-bleed rant that is chukar hunting in on-end country. Instead I am largely lost in thought. Soaking. Absorbing. I’m all in.
His real name is Greylock’s Hank’s Echo. Greylock is a good kennel back east, but this dog is a western lad. It’s the “Hank’s Echo” that is the important thing.
Sage and juniper and greasewood run through his veins. Hank was his grandfather and in this country of echoes on rimrock, Echo is his echo.

A decade before, I climbed the same hill with Hank–a dog all bones and balls–and we shot chukar left and right and Hank pinned them all and brought them all to hand. In the cooling light of a northern Nevada day going away, we walked down to the truck one thousand feet below, Hank at my side and the warmth of a half dozen chukar dead against the small of back. The caprock across the valley splashed pink then gold-red and then it was gone and the chill of December was on me.
A decade gone by and a bird dog buried at the base of a chukar cliff in another state, a place where chukar walk across his grave and his name is carved in soft yellow sandstone above. Now his grandson at my heel, then cast out into the thick of it–the old cold lava, the junipers, the sage, the cheatgrass greening in December sunlight and a fresh-dead partridge in that same frayed-by-years bird vest. Dead and warm against the small of my back and a honed-hard, bones-and-balls white setter out in it, after them.

Sweet post from @kincaidoutdoors save some chukar country by not driving over it…
Making meat Alaska style
The old (32) gray mare ain’t what she used to be but boy was she something. #machina #foxtrotter #retiredinMontana
Kids and puppies go together like cookies and milk. #gordonsetter #setterpuppy #puppies
Somewhere in Montana. Can you guess where?
That’s about right for a long weekend. #settersofinstagram #independenceday