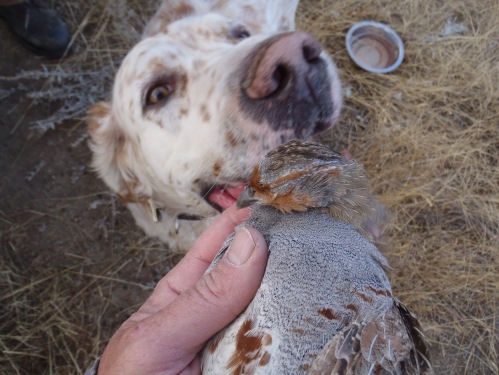 There is a game I play not far from where I lay my head each night. The game is the game of dogs and birds and big canvas. It is a game of otherworldly noses that belong to some higher order, and shotgun shooting that gets no better than my own, for my own is the only gun in the game. The noses pull the dogs, the dogs pull me. Sometimes, on the state piece, I take all four setters. Other times, I take just one. I never play this game alone, for there is always a canine in there, always one of the partners.

I load the old yellow Ford with a dog kennel or two, jugs of water, a dog dish, gun in the gun rack. There’s something special about driving an old F250 out hunting, something antique and retro, something 1970s 8-track, something manual, and honest. We (it is always we, not I, when I hunt with the Setter People) park near the old Van Sant place. Sometime in the previous century, the Van Sants looked out across a hard-bitten Montana mountain/prairie and said, Screw it. Can’t pay the taxes. Let the state have it. So, now, being a Montana tax payer, I have it.

And the setters follow their noses into the wind, pivoting and loping, metronoming, and wind-drinking. For a while, it is this rhythmic gambol, with a fluidity as practiced as the hand of a house painter on brush. Then, en masse, as if they share one nose and not four, they turn to the wind, noses high, tails a bit stiffer and they pull in one direction, forgetting the side-quarter, zeroing in on something only they know, something that exists only in their order, their rank, their world. Not mine. I can only follow, walking fast, then trotting, watching. They sneak now, tense muscle, setting down, slinking, as I imagine their kind did when the weapons of take were the nets of peasants, not autoloaders or double guns. And there it is, that minute, those precious seconds of memory-burn: all four dogs on point, a picture in the mind, burnt deep with the excitement slamming through my soul and right to the very tip of the right index finger that will push the safety off, and pull the trigger. All in one motion.

In a burst of chirp and wing, the entire covey is aloft and I swing and swing and swing. The wind carries the birds and the gun barks twice and two Huns go down and two of the dogs are on them, playing their own game of keep-away from the other dogs and I have two at hand. They are spun of soft feather and autumn hues, their feathers rippled like the brush of an autumn wind on a desert tank, the orange of old pumpkin at their beak and dome. I heft their soft warm in hand, thinking maybe I’ll keep a skin for tying soft hackles, and praise the dogs.

They are already gone.

Out in it, following the wake of the covey, the remaining dozen or so birds. The game must go on.