It started with a point and the beeper ringing across the hillside to my right. As I jogged toward her, I realized she was in some nasty country. I finally saw her standing beautifully, tail high, nose to the sky, pointing uphill. She was on a steep slope and it looked odd to see her at that angle, her high tail marking the low winter sun.

There was a steep, narrow scree field between us and I wondered how the hell she crossed it as I stepped into it, the promise of birds on the other side. 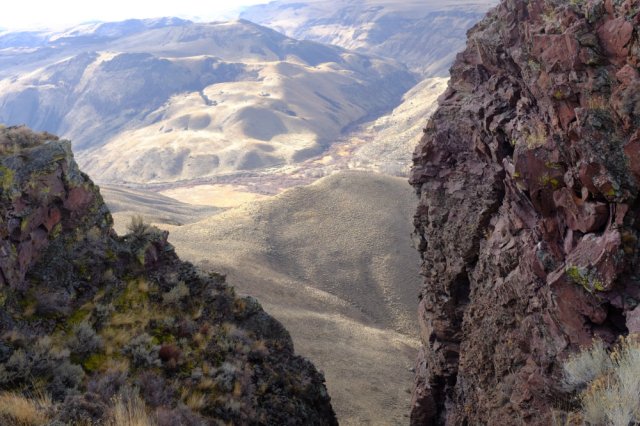 The scree started to slide, a river of rock running in slow motion and I surfed it down, taking steps when I could. I hit solid ground downhill from the setter. My heart was racing, and not just from the cardio. I looked up and she was still standing, steady as a rock, beeper still screaming. Up, up, up. “Good girl, good dog!” And then they were airborne. Two shots, pushing the barrels right, missing and then missing again.

I wasn’t even mad. That was a hell of a point and nothing makes you feel alive like this. And then I broke one of my hard-earned rules. Rather than cross the scree field again, I decided to go down a different route in rugged, unfamiliar country to follow the birds down.

We navigated one set of cliffs, a butt slide and a couple of short jumps and we were making progress, but we worked our way into a narrow chute. Then we hit the 15-foot drop.

I thought hard about turning back, but it was a long climb up, plus some scrambling, plus the scree field. I decided to take a look and see if we could do it. There was a narrow ledge about half-way down and a nearly sheer wall going to it. I sat down and tried to get a sense of the feasibility. I stretched my tip toe, decided it was a bad idea and then I was sliding. My first thought was, “Oh shit,” followed quickly by “No turning back now.” I caught the ledge halfway down with my feet, which was good news coupled with bad. The setter looked down at me from above. I couldn’t climb up, and it was a good drop to the bottom.

Standing on a narrow ledge, I took my gun apart and slipped the three pieces into my vest. The setter started a nervous whine, but I had my own problems. I considered that I might injure my stupid self and checked my pocket for a lighter. I already knew there wasn’t a reliable cell signal for 30 miles.

I steeled myself, then turned to face the cliff and slid my left boot down to a cleft that seemed like a solid hold. A couple of minutes later I was at the base, now with Luna 15 feet above me, howling like a pack of coyotes.

I prowled the base, looking for a route for her to come down. I wasn’t excited about the prospect of climbing back to the top, climbing back up the chute, then crossing the scree and covering the miles back to the route I came up. After a while – Luna growing more vocal by the minute – I concluded that I couldn’t get all the way back up, at least not with the gun and with all my bones intact.

I slipped off my vest and whistle and stripped layers. Luna sounded desperate and it was making me a little desperate too. I left everything in a pile at the base and climbed back up to the ledge. It was a hell of a lot easier going up and without the gear.

On the ledge, I didn’t have a better idea, so I just called the setter. She came without hesitation and I wasn’t totally prepared. She stepped onto the slick rock immediately started sliding toward me, her claws scratching but not enough to arrest her. I moved sideways so she didn’t knock me off the ledge and grabbed her collar as she got to chest level. I swung her around and stopped her on the narrow ledge where I was standing. She was steady, so I let go of the collar and give a whoop of triumph.

I climbed down the same route I took before, but about halfway down, Luna decided not to risk being left again and jumped. She landed like a cat, lightly and on her feet. I rushed, slipped and slid, scraping the skin off my forearms and finger tips while trying unsuccessfully to grab the wall. I hit the bottom on my tip toes and felt my body compress vertically before rolling sideways.

Luna was glued to me as we navigated the last 500 vertical feet to the bottom, butt slid through another chute and clambered down one more cliff, this one not so sheer. At the base of the hill, the adrenaline born of success and terror and elation wore off and I was suddenly bone tired.

At the truck, I loaded Luna in her box, give her a good hug and told her what I hope she already knew.

“I won’t leave you behind.”

Commemoration. New post on Mouthful of Feathers. www.mouthfuloffeathers.com
Enjoying my morning coffee and my new stunning artwork from @katehall_art of my setter October Mabel. Kate is probably the most talented artist for my tastes since Eldridge Hardie. This scene was from Mabel working Mearns border quail at just over year old back in 2015. I’m proud to hang this in my office while I scribble away. #uplandbirds #octobersetters #arizonaquail #quailforever #englishsetter
Part of the horseback Mearns quail hunting team takes a break. #mearnsquail #octobersetters #newmexico #foxtrotter
The best ones always have a lot of character…#englishsetter #upland
Tom and Mabel riding shotgun through Nevada, all the way back in November. #englishsetters #jeepwrangler #yjwranglersonly #stetson
Sharptail are rare in our corner of SW Montana. This one was looking for our pear tree. We haven’t seen a sharptail here in 10 years. @goodmamafarm #ponymontana #sharptail