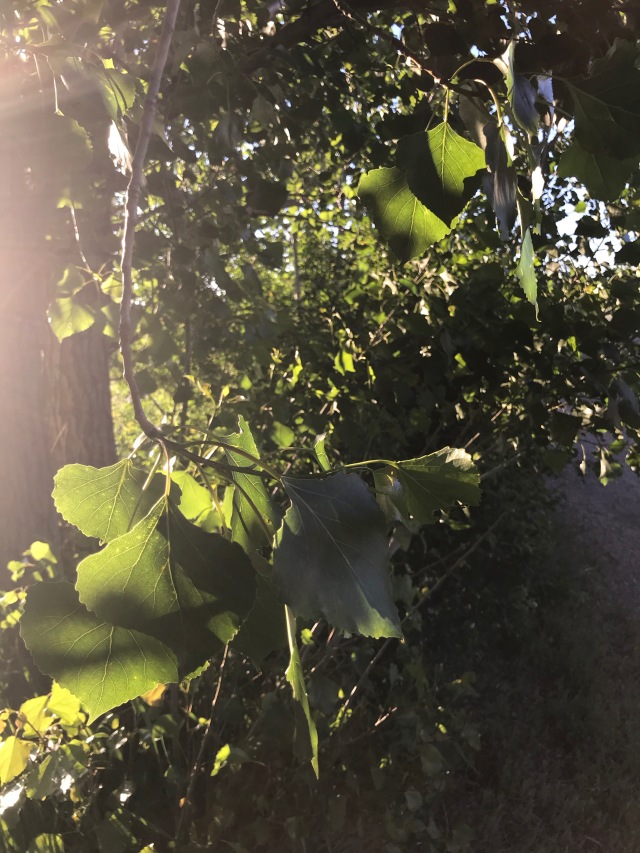 Perhaps you have noticed that even in the very lightest breeze you can hear the voice of the cottonwood tree; this we understand is its prayer to the Great Spirit, for not only men, but all things and all beings pray to Him continually in differing ways. – Black Elk

The way the sap smells. A rising tangy scent among tall trees, buds not out yet, but pushing, pushing. Like bean sprouts in black soil.
The trees rattling bare in spring wind and then, almost overnight, even though you have plotted the course of it for weeks and stared hard, it is there and it surprises you: leaf. New baby leaf, small, the sheen of it a subtle thin blanket like some green lacy organic lingerie. Once, long ago, when I lived in a high mountain valley and we ached for something green in a place where snow cuffed the land hard and fast for months, we made a bet. When, we asked, would the cottonwoods across the street leaf out? Who won the bet is lost in decades, but the date remains: May 17.
June came to this piece of ground where I live and the stream swelled up out of its banks and danced and flowed among the trees, large and small. Saplings bent to the force of it and the soil soaked and soaked until it could not take any more. Down where the stream met the river, more water poured out of the margins, onto fields where center pivots lay idle because God’s irrigation system was in full throat. The river ran between cottonwoods tall and cottonwoods small and pushed brown water full of rich silt onto sapling flats, feeding and watering in one big swell. Then the water dropped streamside and riverside and left mud flats around thin lively stems and sun provided the boost, the power, to young and old trees alike.
Summer now and the cottonwoods fully fledged. Three species on my place, all staking their own part of the ground: black, eastern, narrowleaf. And deep smells now, rich and full. Not the promising subtle-sharp odor of rising sap, but more pervading—the kind of scent one gets when you step into a candle store, a spice shop. A hint, somehow, of cinnamon. Not just from the cottonwoods, though, but chokecherries in their shadow, mint along the ditchbank, grass and flower and soil alive.
I walk with my morning coffee now among the trees, sipping and feeling the height of these giants over me, the deep green shade of their leaf. Cottonwood. I think about the cottonwoods I have known, the places. A shaded glen, an Eden along a desert river where in all directions there was nothing but baking slickrock and sweltering juniper, yet beneath the cottonwoods on a desert river, there was cool greenness and hearty laughter. A thin line of cottonwoods way out in the eastern plains, a line of trees, a line of life. In late summer, no moisture anywhere, but the roots deep in hard sand and cobble-soil and somehow the trees green. Another cottonwood grove in another place, where a vast stand sheltered a flock of wild turkeys and I stalked them with my shotgun and waited. Listened.
No tree has so defined the West as the cottonwood; its fluffy seeds waft in the breeze over nearly every western town, its bark is still nibbled by horses just as it was in the time of Lewis and Clark, its saplings are thrashed by whitetail buck antler and nibbled by mule deer fawn. The scent of dried cottonwood burning in my open-air barbecue pit floats now across a summer landscape and elk steak sizzles over cottonwood coal. Just as it did in the time of Washakie.
Fall will come to this land in a few months, crisping the big trees, tinging them yellow. A new scent will arrive, an odor that somehow reminds me of fresh apples. I’ll walk among the trees with a rifle and wait for a whitetail buck that I’ve watched all summer long. I’ll know his pattern, the shape and curve of his horn. If I’m right and he does what he has been doing, I’ll shoulder my rifle as I lean against the wizened bark of a one hundred-year-old tree and my aim will be solid and sudden. Then the next summer, when the scent of richness hits this piece of western ground, I’ll sizzle venison over cottonwood and think about the cycle of life and the turn of leaf.