Tires breaking tracks in two-day old snow, up the mountain, beyond where the last guy stopped his rig on a high slope. Stopped to glass the benches and ridges, the dark timber, the aspen.
Cutting fresh up past the old homestead with its root cellar of stones, its feral lilac and rhubarb, past the old spring and up the other coulee to the cabin. Park. The dog pirouettes and tap dances. It has been too long for me and she does everything in dog time. Can’t imagine.
We move off through the timber, cutting a loop down through the aspens in the snow. Ready.
The dog gets birdy once in a stand of Doug fir in the middle of the aspen river and we bend to the snow and see the tracks of a grouse going his grousely way. Get ready some more. Ready to swing up and pop a shot in the thick woods. Telling ourselves to swing even if there’s a tree in the way. The dog sneaks, eager, tail frantic, points once, but the tail is moving. 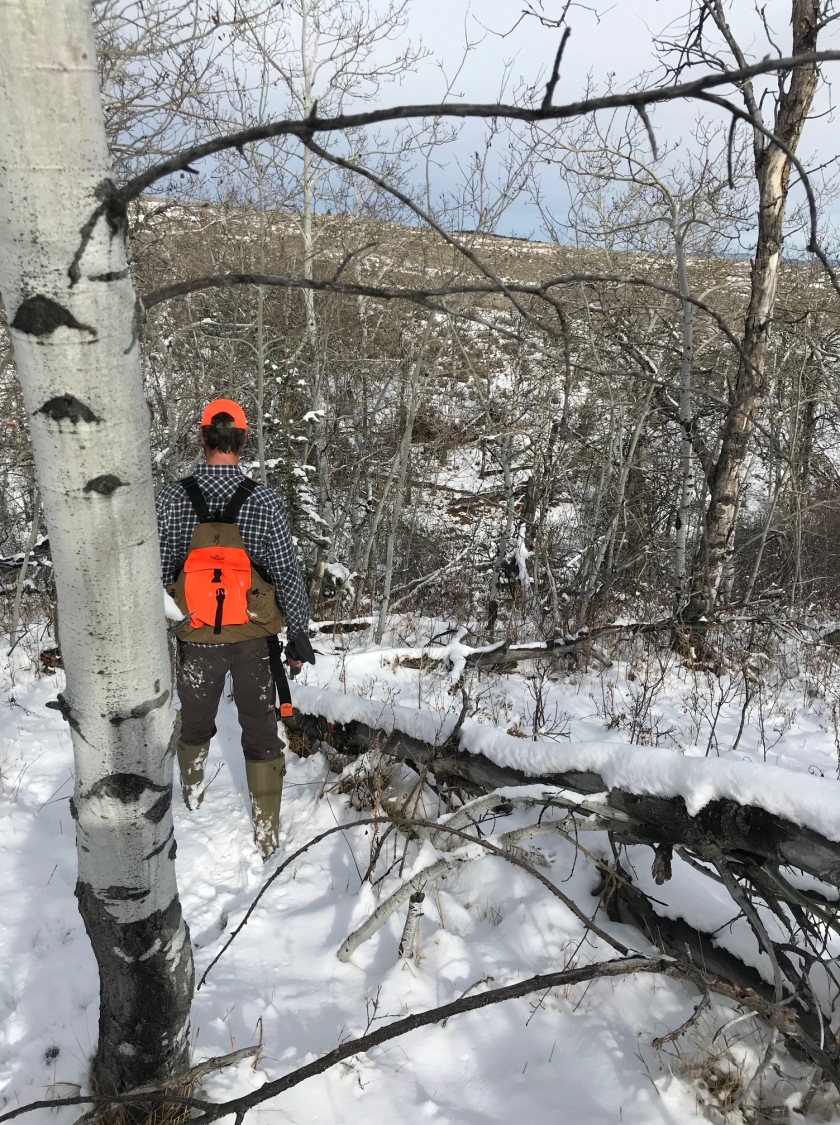 She’s not sure. But get ready.
Nothing. The tracks disappear and we circle and do not pick them up again. Bastard is probably watching us from a tree.
Oh, I’m sure.
More tracks. Moose. A bed. Then another. Maybe more than one. Down through the aspens and alder. Brambles. Another stand of fir and the dog birdy again and more tracks and we spend time there, but no birds. Back up the other side, the sunny side, the dog vaulting logs, running hard. Eating snow on the fly. Barely stopping for anything, the bell tinkling all the time. More tracks.
That’s a cat!
Yeah, you are right. Bigger than a bobcat. Young lion maybe?
That’s what I think.
Those tracks peel off into the sagebrush flat, past the old homestead with its feral lilac and rhubarb. Following the track of the moose.
We head over the bench and down to the next coulee.
I’ve always moved birds here.
A prophecy.
A flash of gray in the trees, the other side of the dog who had just started working scent and had no chance.
Spooky bastard.
Loop up past the flush point. Tracks. Lots of them among the skeletal stems of gooseberry and currant. Another bird out, this one out of a tree that is right at twelve o’clock. Hear the sound, don’t see the bird.
I got him.
Good, where?
Right in those trees right ahead.
We stand there like fools looking at jet contrails. Open-mouthed. Peer through thick needle and branch. Even the dog is looking up, standing on back legs, paws on bark.
Bastard is probably looking right at us.
No doubt.

I think this is one that got away.

I could shake a tree, see if he comes out.

I don’t know which tree.

Work back to the truck, over the ridge, down another coulee with willow and gooseberry. Remember a time when another dog in another canine lifetime flushed a beautiful brown phase ruffed right out of these willows on Christmas Day. The bird flew dead into the window of the cabin. Became part of Christmas dinner.

I’ve got another spot.

Another old homestead with its rusted hope. Another loop. A point or two this time. Huns. But they fool us, circle back then flush out of range. Put two shots after them, but they are gone. Far gone and the time is up.

God, we are lucky bastards, aren’t we?

Four English setters tell me what to do. View all posts by Tom Reed

One thought on “Fortunate ones”