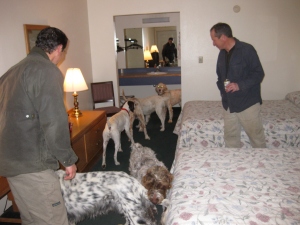 Anyone who has a bird dog and has taken to the road has a good motel story. These stories usually include burs, barking, poop, blood, ass gas and the midnight puking. Not all of these features are confined to the dogs.

All manners and all bets are off when the setters enter a motel room. Beds are made to be jumped on. Carpets made for dragging butt. Toilets for drinking.

I like motel rooms that are on the first floor, with doors opening to the parking area and quick access to a place for a midnight dash. The worst kind of motel is the kind that has access only through the lobby and perhaps one other door, and all the doors open to a shared hallway. If you are really screwed, your room will be up a flight of stairs on the second or third floor and the outdoor poop zone will be some gravel parking lot in the middle of town. Probably behind a bar (occupied by midnight drunks outside smoking cigarettes and making comments about how preeeetty your dog is and trying to pat him without falling over). Assuming you yourself are not in the bar because there’s an early morning of pheasant chasing to be had.

Recently, I found myself in a scenario that was worst-case, as they say. Upstairs, indoor access. Long, long hallway. Three setters one of which was my girlfriend’s, a five month-old puppy and an 11-year-old veteran. Numerous walks with the older dogs at heel, pup on the leash. A gauntlet of dog-patters and cooing admirers to run in the hallway. Early rise planned. Really early. Like five a.m. A dirt parking lot behind the drunks. Worried about the pup and her tentative housebrokeness. Finally, I hit the sack at 11 or so, setting the alarm.

Duke the veteran woke me just before dawn. Panting. Not a good sign. I hurried to get dressed, hooked the pup up to the leash and headed out into the early morning hallway. A quiet, not-a-mouse-stirring hallway long before sunup. Both of the veteran dogs sprinted past me and ran down the hallway at top speed. I did my best Lauren Bacall shout, yell-whispering: “HEEL, HEEL, HEEL. DUKE! HEEEL!!”

The pup went one way while I yanked the other, chasing Duke, who was in the lead. Suddenly, NOOOOOO!! I couldn’t believe my eyes, for there was good old Duke, every bit of 11, squatting and deploying a schooner right in the middle of the hall. The door was shut behind me and the GF’s dog running past Duke while he was in full quiver and the pup jerking the leash one way and probably likely to make Mr. Grumpy herself. And a fresh steaming turd in the hallway. What to do? What, indeed, to do?

I figured I had no choice. I bare-handed the turd. That’s right. Bare hand and a steamer.  My left, because the pup’s leash was in my right.

All of this before even a hint of coffee.

We ran down the hallway, down the stairs. HEEEL. DAMMIT. HEEL. At the bottom of the stairs, first floor, a quick Duke detour to deposit another goodie in front of room 105. Bare-handed that one too.

Finally, door to the outside and there stood a fellow just coming in from his early morning cig break. Duke was jumping up and down at the door that this guy was holding shut. “Hey, I didn’t want to let him out until you were here.”

Out into the morning air, sun a long, long way from rise. I scrambled to the parking lot, putting yards behind me and the guy in the lit doorway. The guy just stood there while I held the pup on a leash and Duke sprinted out to do his third act of the play. The pup peed, then pooped. The guy stood there looking at me. Okay, man, go in and shut the door. I need to get rid of this thing. I have a wet, hot turd in my hand. Two of them. Finally, he went in and I pitched Duke’s little gifts behind the dumpster and loaded the dogs into the truck. Ran upstairs as fast as I could to wash my hands.

It was opening day of pheasant. God, I love bird hunting with dogs.

15 thoughts on “No Tell Motel”