Like the surprise that is autumn—the suddenness of things that happen while you are living it instead of watching it—I’ve found myself with a herd of old dogs. I have a college friend whose oldest child is a freshman at the university. I wonder, how did this happen? Weren’t we just drinking pitchers in our dorm room and hunting quail in the desert? How is it that time marches yet the human brain does not recognize the beat of its feet upon the tarmac? 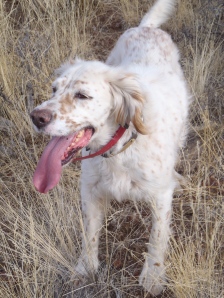 The first dog to go was the oldest and it was his back-end. One spring morning I was out on a horseback ride with the crew, limbering up for summer coming, un-kinking winter’s sloth. We noticed old Ike was missing and rode back to find him panting beside the trail, unable to go farther. He got to ride home on the saddle. Late in the season two years ago, he hunted his last chukar cliff. We didn’t kill any birds. I felt bad for him. He’s eleven now and he totters about on pencil legs and wheezes and barks at nothing much. But he is happy. Perhaps there will be one more pheasant. He was always best at pheasants. Just yesterday, he was a pup before the gun in a Nebraska CRP field with my brother at my side . . . .

I’ve noticed it in Duke too. Duane’s dog. I got Duke when Duane left this world too early and he fit right into the mix. He runs flat out and points tail-high. He’s a good one. I remember hunting with Duane in Arizona whenever I take Duke for a zip. He spins happy circles a lot: feeding time, walking time, shotgun time. Duke is a happy dog. He sprints with the pedal-to-the-metal and can be out of your sight in a moment. Yet, if you are not careful, this nine-year-old dog that acts like he’s two will be completely gassed and gone for the day. I love old Duke, but he’s old too. Good for maybe a half-day on the chukar crags of Nevada. A half-day in the hot rising September grouse tangles.

And now Sage. She has turned a decade old. And then some. Just like my college drinking buddy’s daughter going from an infant to a college entrant, this happened overnight while I wasn’t paying attention. A little female setter with a world of drive, energy and talent. A cargo-hold full of zest and zip and blast. She’s now an old lady.

We were in the Tobacco Roots this past summer when it happened. Hiking to a lake up a steep trail, far back in the country, heading to a high mountain lake, and then even higher. Perhaps we’d do a loop trip. In a dry summer, the mountains were baked to powder and Sage faded quickly, running one moment in grouse whortleberry and winded the next minute in the August heat. Mission aborted, trip truncated. I carried her over my shoulders part of the way back to the truck. Sage is by far the most talented bird dog I have ever been around and now she’s an old lady with only half-days ahead.

Years back, I had a bird dog that ruled the skyline. I was a younger man then and I let him drink the wind. We tore it up together and I probably will never have another one quite like him, nor another moment like that. I can see him now in a North Dakota pheasant field chasing a crippled rooster. The rooster rises against the setting sun and the hard-charging male setter leaps off the ground and pulls it by its tail to the turf. After a long retrieve, the bird is at hand. That dog died tragically young; he didn’t get to be an old dog.

And now, oddly, I have three old bird dogs in my fleet, dogs with years and miles behind them. Veterans of cap rock and corn-row. They sleep now, curled in tight knots, dreaming pheasant dreams or chukar nightmares.  They deserve that—a warmth of woodstove heat, a dream, a good meal and just one more hunt.

This story is excerpted from the author’s regular Up the Crick column which appeared in the September/October edition of Wyoming Wildlife News.

Sweet post from @kincaidoutdoors save some chukar country by not driving over it…
Making meat Alaska style
The old (32) gray mare ain’t what she used to be but boy was she something. #machina #foxtrotter #retiredinMontana
Kids and puppies go together like cookies and milk. #gordonsetter #setterpuppy #puppies
Somewhere in Montana. Can you guess where?
That’s about right for a long weekend. #settersofinstagram #independenceday