Spring brings promise to the land, a newness to things—a freshness carried in sleeping schools of young beeves, a sharpness in green hues of new grass and popping leaf, a cleanness that washes out of the high country and purges the rivers of driftwood and winter’s flotsam. But this spring carried something else, another kind of hope, the hope that floats the hunter’s heart: a new bird dog pup. A setter.
He turned 77 in May and he is hard on himself. Too hard, I think, for I know of no other 77 year olds who can still fork a horse and take the high country. He kicks himself for not riding his young red horse much, and he laments the aches and pains of a man in his eighth decade on this Earth. But he is still going and he still goes. Last fall we drove to the end of a road and set up an elk camp in his travel trailer. In the darkness of pre-dawn, he rose and he walked slowly with a rifle in one hand and a walking stick in another down a snow-clad trail. This spring, he rode a horse on the winter ranges, looking for sheds, watching redtails wheel in the sky overhead. When he got tired he said, Let’s turn back. But he still goes. 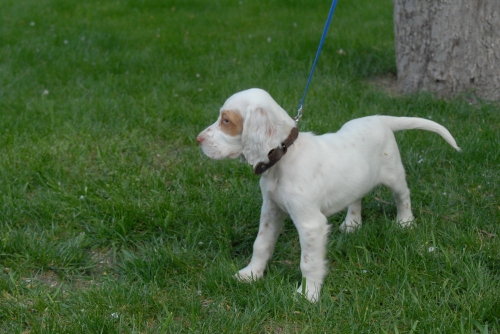 His old dog died last summer, just shy of the thirteenth year. His younger dog blew out a tendon, then had another health problem and another. He did not heft his shotgun much. He could have hunted behind my dogs, but it’s different when your own can’t go. You don’t have to explain that concept to the hunter.
This winter, we talked about a new pup. He did not say much, but I wondered if he thought about those times he had called me and begged off of a hunting or fishing trip because he was wasn’t up to it. There had been a few. Not many. I wondered if he thought about not hearing a grouse thunder up from behind a nearby Doug fir, or sometimes being not quick enough to track and fell a speeding Hun. If he had those kinds of thoughts—whispers of doubt from an old outdoorsman with miles behind, they did not surface.
He sent his deposit in when the snows were deep on the flanks of the mountains around his home. He wanted a female. His life had been spent in the company of big rangy affectionate male setters. This time, he wanted a female.
Spring finally came and we drove across the sweep of it, alongside those rivers swollen and thick with a winter’s worth of snowmelt, past tender brilliant aspen leaves bursting into warm sunlight, around snowdrifts making mud in their wake.
There were four females to choose from and his wife and I had our preferences—dogs that one or the other of us would have chosen. But speaking those words would have been wrong. This dog—this dog in the 77th year in the company of canines—was to be his, perhaps more than any other dog before her. The pups romped in the yard, chasing each other, grabbing sticks, rolling over each other, bounding awkwardly and eagerly at a whistle. Twice he asked us for help in the choice and both times, we refused. This belonged to him, not to us. Perhaps only a half dozen years ago, I might have made a remark about the eagerness or the feistiness of one pup over another, but this time, I sat back and I watched him make his rounds through them until he finally bent to one and put his hand on her head and said This one.
She is a small and fine boned bird dog with a bright orange patch over one eye and a sharpness to her look. She is as clean and promising as spring on the land.
She is growing now and learning about horses and alfalfa thick in the fields and the rhythmic music of wheel-lines spreading water under the summer sky. She is learning about smells and bugs and mice and the occasional river of scent that is a hen pheasant and her chicks scattering through the field.
He watches her interact with the older veteran dog and speaks sternly when the big male growls at the precocious pup. And he talks. He talks of places he wants to go this fall with his young new bird dog. He talks of trails he wants to ride, and places he wants to fish. I like that about him. There are trails left to ride. Bird dog pups to watch grow up.

This story first appeared in Wyoming Wildlife News, a publication of the Wyoming Game and Fish Department and is also posted on the author’s website: http://www.tomreedbooks.com

4 thoughts on “One More Pup”