So little of what we’re left with at the end of the upland season is tangible. Sure, there are guns to clean, maybe some birds still left in the freezer (though I rarely show that much self-discipline), and inevitably, finding new ways to try and occupy highly-energetic four-legged athletes. Ultimately, though, most of it will live on only in memory.

But then there are these feathers laying in front of me on the tying table. Ruffed grouse. Sharptail. Pheasant. These aren’t detached, consumable products in neatly-labeled plastic bags purchased from the fly store, packaged and shipped from Dog Knows Where – these came from birds my dog and I worked hard to find, birds I caused to drop from the sky, birds that, well, to be totally honest, he only sometimes half-heartedly retrieved in that way that so many pointers do who can’t be bothered with such mundane tasks, tearing off already to find the next holding covey instead. 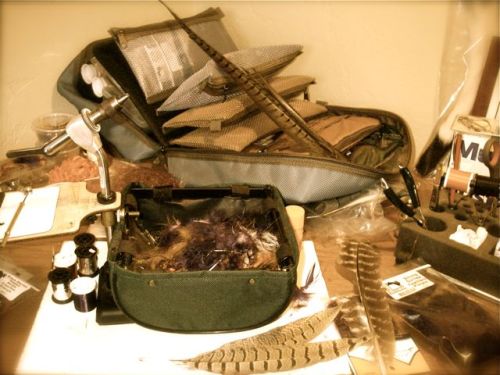 These feathers sit in front of me on the table now, haphazardly strewn about amongst threads, tinsels, furs, tying tools, in a system of highly-subjective organization that others would likely call a mess; raw material from which I hope something useful will eventually emerge. The flies that will come of these feathers will occupy a special place, if not in my fly box, then at least in my mind, easily recognizable as different than those commercially tied by others in Sri Lanka or the Phillipines from materials of mysterious origin.

And when I remove that ragged, grouse bedecked fly from the cutthroat’s mouth, and release it back into that little creek high up in the newly melted alpine, I’ll flash back to that day last October when I was up to my knees in mud, shotgun in hand, trying in vain to keep up with a dog tracing currents of bird scent across a sweeping landscape, pulled along by compulsions I’ve never fully understood or bothered to explore; satisfied instead by knowing that not doing these things would cause a slow withering of my soul, which is simply not an option.