We had decided that we weren’t going to accept the end of the season with anything resembling passive resignation. There would be no finding of lame excuses for occupying these end times with other, less worthy activities, while a few days of permissible bird chasing remained. No pathetic, “it would be nice to get out one last time, but it’s too cold now,” sniveling.

Perhaps most importantly, we wouldn’t be able to look these guys in the face if we simply let the season end with a fizzle:

And so, one last trip was hatched. A place none of us had hunted before, interest buoyed by whiffs of rumor and suspicion that an elusive, red-legged partridge might find such barren country to its aberrant liking.

It wasn’t easy, but frankly, in a perverse way, we wouldn’t really want it to be. This isn’t about “easy,” or we would be sharing this country with the hordes; McLodges springing up like blight on a country that deserves to remain desolate and wild and beyond the reach of those who think that with enough money,

any sort of instant gratification can be had. These birds, in their wild state, will always demand more than you assume. Unless, of course, you go in assuming that an ass-kicking and a steaming hot plate of humble pie are on the menu.

In the end, we can unashamedly say that we wrapped up the season with deliberateness, with new country under our boots, with a few birds in the bag and the satisfaction of knowing we didn’t listen to any of the all-too-easy excuses for not going that can leave one staring out the window. No. We chose the only conceivable way to face the next seven, bird-less months with a modicum of fortitude, till we can feed our upland souls once again. 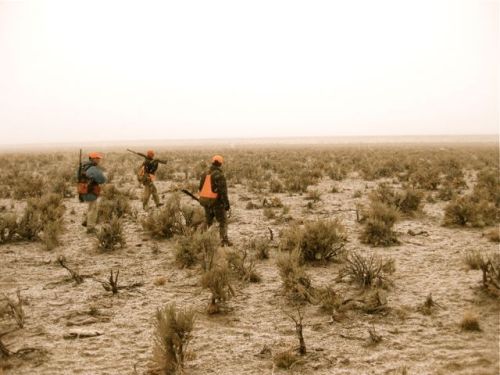 7 thoughts on “Ending it Right”