“Where you guys hunting?”

Really? Did I just hear that? Did he just say that? 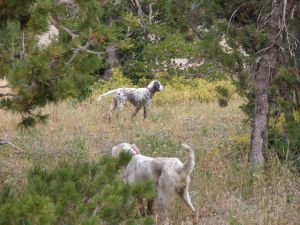 These are places earned in sweat. Toil. Research. Where you guys hunting? I’m gonna tell you that?  A stranger in a parking lot motel with a SUV full of bird dogs? Umm . . . . Nope. GFY, dude!

We came here, to this tiny Wyoming burg, with hopes of birds and dogs on hard point. We each drove a half-dozen hours. I told my friend that I’d take him there only if he swore that he’d never take anyone else and never go there without asking me if he could. In the planning phases, he had asked me about another hunter, who lived only two hours away.

“What about taking him?” he had asked.

My answer was something like, “A guy who lives only two hours away? He hasn’t earned it. We don’t need to spread the word.”

To the novice, or to the hunter with only a few thin years under his boots, or to perhaps that uninvited hunter (whom I’ve nothing against), this might seem like raw arrogance. This is, after all, public land. Everybody’s land.

But this place, and many others, is sacred ground.

We found it, another hunter and I, almost twenty years before. Then, as now, we swore we’d take only a smattering of people, those who understood the blood oath, who understood the scarcity of a place with good birds and great hunting and deep reward in a shallow land. We’d take a few friends who lived many miles away, but even they would need to honor the oath. We shook on it.

I had done the research, talked with a warden and a biologist, and when we first stepped foot on Giffy Butte, we saw bird tracks in snow dust. This was a year or two before his best dog was even born. My best dog was between us, a pup of eight months with a heart full of talent. We got into the birds, killed limits. Swore on our souls.

His best dog and mine are dead now. Mine is buried out there, in a shallow grave scratched in a hard land.

Today my friend I’m showing this place understands. We load his fine young dog and my pack into my truck and we drive there. There will be no revealing of this secret place to others–and certainly not to brazen eager turds in a motel parking lot.

I knew I could trust him.

My other friend, a kindred soul and fellow addict, called the other day. He was livid. Two friends who had taken the oath had lied. They had shown another that sacred spot and yet another leak sprung. Will this new addition honor the oath? Unknown. I barely know him.

But there is a resentment there. He hasn’t done the homework, nor, in fact, did those who showed him Giffy Butte do theirs. They were guests on the coattails of my generous friend’s sweat and hard work. For that gift, they gave him and me more competition on a place that we hold very dear. Thanks guys. Such betrayals are hard to forgive and I know that my friend will not be likely to share a new secret spot with them again. 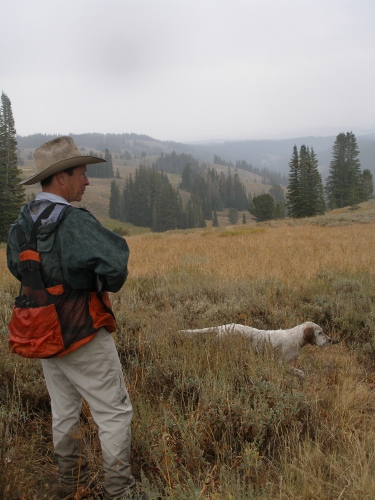 For the hardened hunter, the avid dog man, such places are the core of the soul. The sharing of them is a time-honored ritual, a blood oath, a sacred trust. I have another friend who has walked many miles with me, a person I’d trust with my life. I’m even the designated executor of his will instead of his own son, but he never showed me his very best blue grouse hunting spot in Colorado. I never asked him to. And if he had, I would have never shared it nor even gone there without him. I would have held it as tightly as I’d hold an heirloom from my family’s ancestral trek on the Oregon Trail.

Sacred places. Some, even, are on private land. Many are on public. In a sport where territory sifts away each year like sand through an open palm, good hunting places are slipping. A place where I used to hunt Wyoming wild pheasants is now locked up tight. Another place where I chased blue grouse in high mountain holds has been nuked by greedy sheep and I’ve found more and more empty shotgun shells every autumn.

Herein lies the creed: do the homework, find your own places, walk long, sweat much, go birdless, find reward. If you want to share it, then do so. But share it knowing that life changes. Others discover. The land changes. The birds cling to life. Yours is a rare honor. Honor it.